Last weekend I headed home to southern California to attend a reunion of my high school marching band. I had an absolutely fantastic time at the reunion, and as an added benefit, got to visit my parents for a few days. Normally when we visit, they take the whole family out to a nice mid-range restaurant for dinner. But this time, since it was just me, they decided to go high end and took me to dinner at the Parkway Grill in Pasadena.

A landmark of the food scene in Pasadena for 25 years, the Parkway is one of several restaurants in the Smith Brothers empire, consisting of six upscale area restaurants. We arrived around 6:30, left our car with the parking valet, and went in. I had made the reservation using Open Table under my name, and let the hostess know that we had arrived. We were about to be shown to a table, when a young man (apparently an assistant manager) came bounding up to us and greeted my father like a long lost friend. Now, I know that he used to eat lunch there occasionally, but I didn't realize quite how well known he was. Apparently he'd once brought Hugh Downs there for lunch, but he's never given them his name. He always pays with cash, and the staff has tried to figure out who he is. Well, they now have his last name since I made the reservation. Anyway, the assistant manager showed us to one of the best tables in the house, next to the window in the atrium. He knew exactly the kind of cocktail that my father wanted, and gave him the first one on the house. Wow, I thought I was just going to dinner - I didn't realize that we were going to get rock star treatment!

The food and service were excellent. My dad and I each started with oysters on the half shell, and my mom ordered the famous black bean soup with tomatillos and crème fraîche. I had a nice glass of New Zealand Sauvignon Blanc with the oysters, and my mother ordered a glass of California Chardonnay. For the main dish, I had some wonderful braised short ribs with scalloped potatoes, tomatoes, and a port-truffle veal glaze. I paired this with a delightful Meritage from BV. The food was very well executed, but not terribly innovative.

Sadly, I'm writing this now almost a month after the fact, so I can't remember what we had for dessert, but I remember that it was very good.
Posted by Twobones at 9:35 PM No comments: 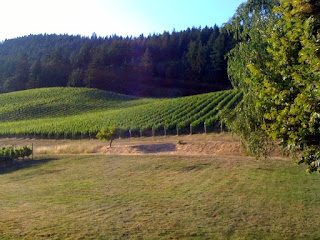 Oregon has the reputation of being wet and rainy most of the time, but the truth is that it only rains through July 4th, then it's usually pretty nice until late fall. This means that it's pretty gutsy to schedule an outdoor concert on July 3rd, but that's just what David Hill winery did this year, and they beat the odds with a beautiful warm and sunny evening. Rachel and I took the long arduous drive from our house up to the winery (all of 3 minutes I think) and met our friends Rhonda and Tracy there. The Dick Lappe band was again playing, but this time they'd set up under the huge tree in back of the yellow farm house. It had been a warm day and we were all grateful for the shade of the tree. 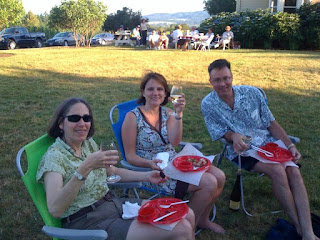 Rhonda and Tracy had bought a bottle of Farmhouse White, and we bought a bottle of Blackjack Pinot Noir. The winery had brought up The James Gang BBQ company to serve food, so we were set for a nice evening of wine, food, music and friendly conversation. Dinner was BBQ brisket, half a game hen, beans, and a pasta salad, and the Blackjack was a great accompaniment to the smoky flavors in the meat. As we were sitting there drinking really nice wine, listening to great music and looking out over the setting sun lighting up the vines up the hill, I had to smile broadly and be thankful that we live in such a great place. It was a great evening and it was fun to spend time with Rhonda and Tracy.

On the 4th itself, we had a fairly quiet day. I watched the poor Dodgers get beat by the Padres, but did try a bottle of my new stout with lunch (hot dogs, of course). It needs another week or two in the bottle before it's fully carbonated, but I think it's going to be very good. It's slightly sweeter with a bigger, smoother mouth feel than my previous stouts. For dinner, I made spicy lamb burgers which we served with Rachel's Greek yogurt sauce and feta cheese and paired with a tasty Malbec from Mendoza. After it got dark, Rachel, Tim and I lit off fireworks in the driveway, while Josh stayed in the house. He said it was dumb to light off fireworks that someone else had made (??). The most exciting part of the evening was when the big pinwheel shot some sparks into the dry landscaping and started a small fire. Tim, who usually doesn't notice anything, was the first to see it. We stomped it out pretty quickly with no harm done.

On Sunday the 6th Rachel and I went to first meeting at church and then headed down south toward Canby to attend the open barn at SuDan farms. You may recall that they supplied all the great lamb to the Dundee Bistro for our lamb feast in May. It wasn't quite what we had expected, although I'm not sure what we were expecting. In addition to lamb, they raise chickens, ducks and turkeys. We got to see several batches of chickens of various ages, starting with the baby chicks in cages to the mature chickens in the movable chicken houses in the pasture. We also saw young turkeys and ducks. We put in our order for a one year old sheep (parted and frozen of course) and took home a few lbs of ground lamb (more lamb burgers!) and riblets. 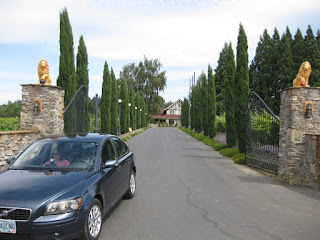 On our way home, we thought we ought to stop at a few nearby wineries. Rachel had seen the signs for St. Josef winery on the way there, and since we'd never had their wine before, we decided to try it. There aren't a lot of wineries near Canby and St. Josef certainly isn't a big name, so I was expecting a small mom and pop operation. As we turned into the driveway it was obvious that this wasn't the case - it looked like Temecula again with a long driveway lined with arbor vitae leading to a large building that looked like it wouldn't have been out of place in the alps. After we parked and were walking toward the tasting room, I could see a lot of serious winery equipment just down the hill - this was a real working winery. 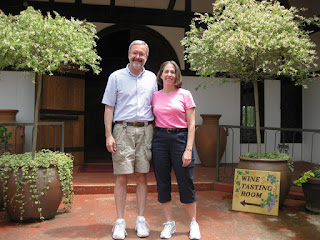 We were met by the very friendly tasting room pourer who took our picture in front of the tasting room before we went in. Josef, the owner and wine maker, emigrated to the US from Germany in the late 50's and eventually found his way out to the Willamette Valley in Oregon. The first vines were planted on the estate in 1978, and they had their first commercial vintage in 1983. All of the grapes for their wines come from the estate, so they have the typical Oregon varieties: Pinot Gris, Riesling, Chardonnay, Gewurztraminer, and Pinot Noir. Surprisingly, they also grow estate Merlot and Cabernet Sauvignon! We tasted through pretty much everything they had open and were quite impressed. The whites were generally crisp and clean with good acid. They had both an unoaked stainless Chard that had not gone through ML, as well as a slightly oaked version that had gone through ML. Both were very good, just different styles. The Rieslings were OK, but at just the wrong amount of residual sugar for me. I prefer Rieslings to be either nearly dry (1-2%) or fairly sweet (5+%) and that area in the middle generally doesn't do it for me. Both the Pinot Noir and Merlot were good, but not great, but the Cab was just amazing, especially considering it was grown in the northern Willamette. It was fruity and ripe, but not over the top, with good tannins and acid. All told, a very nice experience and some good wines.

We then headed northwest to Newberg and decided to stop at Vercingatorix (aka VX) Winery. We'd not tasted their wines before either, but I'd heard that their Pinot Noir was pretty good. Actually getting there was harder than I thought it would be. They have the nice little blue signs in Newberg pointing the way, but the roads kept getting narrower, then turned to gravel and went up over hills, around curves, through the forest, etc. Fortunately, the winery had posted encouraging signs like "You're almost there" to keep our spirits up.

The tasting room is in a barn on the estate; the wine itself is actually made at Northwest Wine Co. in McMinnville. VX is strictly a Pinot house, which often means just Pinot Noir, but in this case it also included Pinot Gris and Pinot Blanc. The Pinot Blanc was crisp and refreshing - an ideal summer wine with light food. The Pinot Gris was OK, but tasted a bit harsh. They were tasting 3 vintages of Pinot Noir - the 2005, 2006, and 2007. They had recently taken the 2007 off the tasting room menu since so few people were liking it, but someone had wanted to try it earlier, so they had a bottle open. The '05 was good - nice fruit, smooth tannins, fairly well balanced. The '06 was very ripe and fruity, maybe a bit too jammy. The '07 was magnificent - subtle fruit, but earthy with hints of mineral. It needs some time, but I think it's going to be great. I suppose that most people didn't care for it in comparison with the huge '06, but I've really learned to see past the seduction of the big fruit and look for more complexity in my Pinot Noir, so I really much preferred the '07 (we of course bought a bottle and stashed it away for a year or 2).
Posted by Twobones at 7:45 PM No comments: