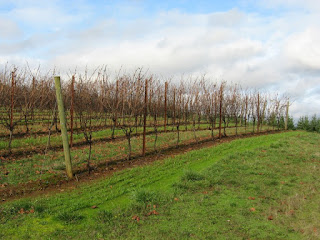 We usually go camping over Thanksgiving weekend every year, but that means we miss out on one of the biggest wine tasting weekends of the year. Fortunately, many wineries also open their doors to club members and past customers on the weekend before Thanksgiving, and Rachel and I ventured out to pick up the futures that we'd bought earlier in the year and to taste through some wines.

We took along a recording GPS unit, and I ran it through my "Automatic Memories" software which extracts details of where you stopped and creates a skeletal blog to help you remember where you went. Because I'm actually writing this about 3 months after the fact, I'm relying on the auto-blog to remember where we went. I'll fill in few details as I remember them.

11/21/2009 10:03:17 AM
We arrived at Patricia Green Cellars. We had purchased several bottles of Pinot Noir futures from her, and came to pick them up. We also had some marvelous Sauvignon Blanc. It was funny because Tim was on his way to a swim meet with a friend, and apparently they drove by the winery. Just because it was a winery, Tim said, "Hey, maybe my parents are there" not having any idea where we actually went. But, sure enough, they looked up the hill to the parking lot and saw my car! 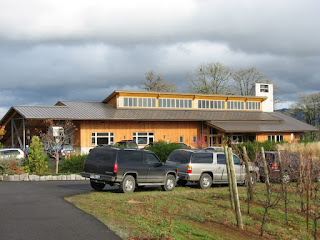 11/21/2009 11:02:02 AM
We arrived at Penner-Ash Wine Cellars. They always put on quite a spread that usually includes barrel tasting and good snacks, and today was no exception. We tasted through several of their blends and single vineyard Pinot Noirs, and got barrel samples of both some 08's and 09's. 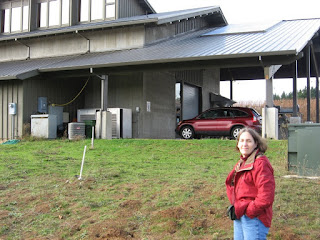 11/21/2009 11:59:02 AM
We arrived at Shea Vineyard. We have long been fans of the wines made from Shea Vineyard fruit, and we also enjoy several of the wines that they produce themselves, especially with their new winemaker Drew Voit (previously an assistant winemaker at Domaine Serene). We had purchased futures of their 2008 Homer Pinot Noir and were here to pick it up. They were offering tastes while we were there, and it was just as good, if not better that we remembered it. Those bottles are going to disappear into the cellar for a few years! By the way, I recently learned that the Homer name refers to it being their best effort to hit it out of the park - a homer. Hmm, not mythical at all.

11/21/2009 12:46:27 PM
We arrived at American Cafe. This is a little roadside cafe, and from the name and copious US flags decorating the sign and windows, we should have figured out what we were in for. The food was pretty standard diner fare (I had a patty melt), but the decor was right out of a right-wing propaganda commercial. Lots of pictures of eagles, flags, fighter jets, soldiers, etc. with "my country right or wrong" slogans all over the place. I half expected to see Rush sitting at the next table (fortunately, he wasn't there). Nice enough people, I'm sure, but ya think they might have a blind spot (wink, wink)? 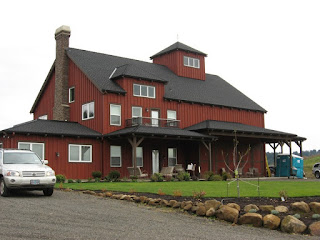 11/21/2009 1:49:52 PM
We arrived at Dukes Family Vineyard. This is a fairly new winery that is run by a very nice family who recently moved here from California to make wine. They have recently re-built an old barn on their property as a winery. They're not quite ready to make wine there, but should be in a year or two. They were previewing their 2007 Pinot Noir (very dark, smoky and earthy) along with their second label Syrah. They had invited their neighbors, Iota Wines, to pour also, and they were very nice people with a good Pinot Noir. The funny thing is that they put out an incredible food spread with tri-tip steak, mushroom soup, and a bunch of breads and cheeses. If we'd known that, we'd have skipped the American Cafe and come right here.

11/21/2009 3:12:27 PM
We arrived at Lachini Vineyards. This is a vineyard on Calkins Lane that we have liked very much. They make a number of different estate grown Pinot Noirs, along with some big reds using Washington fruit. They also put out great food. Sadly, the wine was a little bit disappointing this time. It wasn't bad, but it just wasn't as special as we had remembered it in the past. Perhaps our palates were tired, or something, but it just didn't have that zing to it like usual. We'll have to check in again.

11/21/2009 3:49:02 PM
We arrived at Arborbrook Vineyards. Our last stop of the day, we were here to pick up some futures of their 2008 777 Estate Pinot Noir. We still like their wine very much, but they too have suffered a bit in our memory. Their 2007 777 estate Pinot Noir is just not as intense and interesting as it was in earlier vintages. Maybe it's just an example of a sub-par 2007 Oregon Pinot. The 2008 futures that we picked up seem to be much better, so maybe they just had an off year. However, their 2007 Vintner's Select Pinot turned out quite well and had that dark earthiness to it that we tasted in their 2006 estate. Maybe the siphoning off of the better barrels into the select is diluting the estate? Fascinating to think about. We'll keep an eye on them.