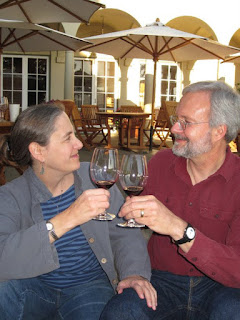 Wow, I just looked at the drafts folder for this blog and realize that I've started 10 blog entries since April and published exactly one. We've had a great year so far, full of wonderful food and wine, but I don't seem to have had the motivation to write about it. I don't know if I'm going to every get around to writing up full posts for all of these, but maybe I'll summarize here just for memory's sake.

In April we attended a wonderful winemaker's dinner at Farm to Fork restaurant in Dundee. This is the restaurant within the Inn at Red Hills, one of several relatively new upscale lodging options in Oregon wine country. It's owned by Kendall Bergstrom and Paul deLancellotti, local winegrowers and winemakers, so they know wine. We had eaten there once before (for my birthday, I believe) and had a very nice meal. They hosted a series of winemaker dinners throughout the year, and we chose to attend the dinner featuring the wines of Bergstrom and deLancellotti. Winemaker Josh Bergstrom (Kendall's brother) and Paul were both there to share and talk about several wines. Josh even previewed their 2008 Bergstrom Vineyard Pinot Noir - an amazing deep, dark and muscular wine. Paul brought his 2007 and 2008 estate Pinots which were both amazing. The food was good, but not spectacular, and we ended up sharing a table with some delightful people which made the entire evening memorable. Notes: apparently Farm to Fork has a new chef, so we need to go back to see how the food has changed.

In the world of wine glasses, size and shape do matter. We've demonstrated this to ourselves a couple of times by trying the same wine in different Riedel glasses. Yes, Pinot Noir tastes better in a Pinot Noir glass, while Bordeaux varietals are flat. They taste better in (you guessed it) a glass made for them. The boyz of course think this is all non-sense however. That is, until we brought home a couple of Riedel O glasses from this year's McMinnville Food and Wine Classic. The Riedel O glasses are stemless tumblers which I generally don't like for wine, so we decided to let Tim try some milk in one. Although we regularly drink skim milk, it tasted richer and creamier out of the Riedel glass. The next night Josh was home for dinner, and we gave him some skim milk in one of the glasses and asked him "what's different?" Thinking himself clever, he replied "Oh, you got whole milk. Big deal." Yes, it was a big deal because it was skim milk. I wonder if Riedel knows that it has a milk glass?

In May we attended a couple of AVA sponsored tastings. These events bring together producers from a specific sub-AVA of the Willamette Valley to showcase their wines and show off what their AVA can offer. The first was the annual Yamhill-Carlton spring tasting event which was held this year at the Anne Amie winery near Carlton on May 1st. Rachel had a conflict so I went by myself. The wine was great, and I ran into several friends and favorites (Trudy Kramer of Kramer, Chris Berg of Roots, and Stag Hollow) as well as some relative newcomers or new discoveries for me with nice wine (Ghost Hill, Atticus, and Alexana).

The second event was "Pinot in the Pearl" on May 6th sponsored by the Chehalem Mountain AVA. This was a much more upscale event held in the Pearl District in Portland. Lots of great wine paired with wonderful food from local restaurants. Favorites here included Alloro, Arborbrook, Barking Frog, Blakeslee, deLancellotti, Et Fille, and Utopia). We ran into lots of winemakers we knew, and really enjoyed the event.

Another relatively new hotel in the area is the Allison Inn near Newberg. It's an incredibly upscale Inn with all the amenities including a day spa. The restaurant at the Inn, called Jory, had gotten great reviews, so we decided to check it out.

It's off the beaten path and there are several ways to get there, but we discovered for us, the best way is to come down Zimri Dr. off of North Valley/Bell Rd. We were slightly early for our reservation, so we walked around the grounds for a while. They've tried to make it very "green", so the landscaping is clover mixed into the grass, and many native plants. It also has a growing roof, and priority parking for electric and hybrid cars.

In all, a wonderful dining experience.

The Big One - Memorial Day weekend (and the weekend before)

Rachel and I ventured out on both weekends, visiting over 30 wineries and tasting hundreds of wines. I'm hoping to publish full blog entries for both of these weekends, so I'll not write anything more here. 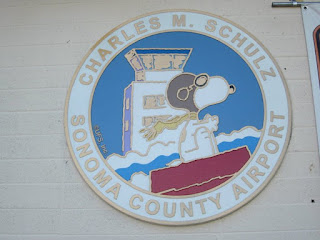 As much as I usually dislike inter-league baseball during the regular season, it offered us a rare opportunity to see both the Red Sox and Dodgers in action against the Giants in back to back games on June 27th and 28th.

We flew into Santa Rosa (my favorite airport in the world) on Friday the 25th for an afternoon of wine tasting. Ben was training for a bike race, so he met us there with his bike. We took his car for wine tasting while he was out riding the Sonoma County back roads. The first thing we discovered is that all of my usual meticulous planning is worth it. I didn't plan much this time, assuming that we'd easily find 4 or 5 wineries that we could stop at. The problem was too many options. We headed off in one direction, not realizing that the winery we had targeted was about an hour away. After driving through heavy traffic for about 20 minutes, we decided to turn around and just stick to wineries closer to the airport (where we would be meeting Ben again after his ride). We ended up visiting Iron Horse (so-so sparkling wine), Porter Creek (nice small family winery), Arista (very nice Cab Franc, Sauv Blanc, and Russian River Pinot), Hop Kiln (not very good wines, in spite of the reputation), and Martinelli (rushed and impersonal. Can't remember the wines). 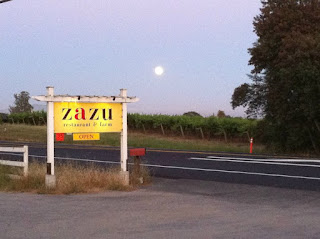 We then met Ben after his ride and drove him to the local 24 Hour Fitness so he could take a shower. The three of us then headed off for dinner at Zazu. Unknown to us at the time, this is the restaurant owned and run by Duskie Estes, one of the contestants on The Next Iron Chef. The food was good - well prepared homestyle cooking.

After dinner we headed into the city while listening to the Red Sox/Giants game on the radio. I can't remember all we did the next day and a half, but I remember that it included a great drive and walk up Mt. Tam and a visit to the Basement of Sports where I purchased a nice fleece jacket. On Saturday night Rachel, Ben, Joan and I had a fabulous dinner at Bix. It was so dark in the restaurant that the wait staff offered flashlights to read the menu. The food and wine were fantastic, including Dr. Loosen Riesling, ceviche, corn/clam chowder, steak and mashed, fromage blanc and strawberry sorbet among other delights. As we were finishing, a great jazz trio started playing; I could have stayed and listened all night. 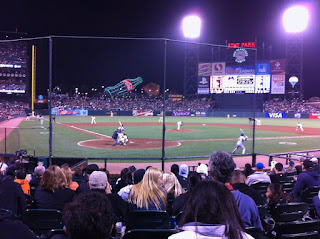 The baseball games themselves were great - we watched Jon Lester pitch a complete game as the Red Sox won, and had unbelievable good seats for the Dodgers game the next night. The Giants were great hosts and graciously lost both games. Interesting note: because we attended those two games, I got to know the Giants players better, and ended up rooting for them against the Rangers in the world series.

That pretty much gets me caught up to October. I still need to write some posts about our 3 day trip to Sonoma, as well as pre-Thanksgiving weekend wine tasting.
Posted by Twobones at 9:20 AM No comments: