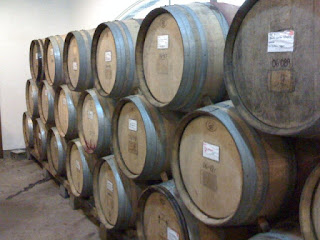 Valentine's Day weekend has turned into somewhat of a big tasting weekend among Oregon wineries - not as big as Memorial Day or Thanksgiving, but many wineries open their doors to the public or hold special events. On Saturday, Rachel was officiating at a high school district swim meet (Tim was swimming), so I headed out on my own. It's less fun going wine tasting by yourself, but a lot better than not going at all.

My first stop was a port and chocolate tasting at a new restaurant in Dundee - Farm to Fork. We've not yet eaten there, but certainly plan to soon. The menu features fresh local ingredients and an extensive wine list. Today however, a representative from Kopke was there to sample Port. Each port was paired with chocolate made by Cocoa Velvet, a Portland-based chocolate maker. The Ports ranged from a ruby and a tawny, to a 10 year vintage-style port to an amazing "Century Port" made using a solera system over 100 years old. It was very good, but very expensive.

I then headed back north into Carlton to Scott Paul Wines where Scott Wright was pouring Burgundy from cult wine superstar Lucien Le Moine. It's rare to even find this wine available for sale, much less open for a tasting, so I wasn't going to miss it. All the wines were from the 2007 vintage. We started out with a (white) Puligny-Montrachet Les Folatières 1er Cru which was sharp, crisp and very minerally. I really enjoy white Burgundy with it's often austere fruit and great acid. Next it was a Chambolle-Musigny les Charmes 1er Cru with darker fruit and earther, toasty tones. The Vosne-Romanée Beaux Monts 1er Cru was brighter and fresher with more light fruits, while the Pommard Grands Epinots 1er Cru was fruitier and riper. Finally, the Echézeaux Grand Cru was amazingly earthy and complex. Scott said it would be much better in a few years, but I thought it was drinking pretty well now. All the wines except 1 were over $100 a bottle, so while it was wonderful to taste them, I didn't get anything. Scott was also tasting through his own wine and a few Burgundies from his normal lineup, and I ended up going home with a couple bottles of the newly released 2007 vintage of his flagship Pinot Noir La Paulée. It's a great restrained and elegant Oregon Pinot. Interestingly, the Lucien Le Moine wines were sold out before I left, so anyone who came later in the day missed out on the tasting.

Next it was off to Penner-Ash for a vertical tasting of their Willamette Valley Pinot Noir. Penner-Ash makes some very nice wines, and they also have some of the best events at their winery, usually paired with some really nice food. I started out with their 2008 Viognier which Rachel and I tried at Thanksgiving. It is an excellent example of a Viognier with good acidity and a spicy finish. Next it was on to the 3 vintage vertical - 2006, 2007, and 2008. The 2006 was of course the biggest and ripest of the bunch, while the 2007 was more restrained and elegant. The 2008 was a surprise since I had been expecting more fruit than the '07. It was also fairly light with bright strawberry and not quite the earthiness of the 2007. Of the 3, the '07 was my favorite. Finally, their 2006 Syrah. They source the fruit for this wine from the Rogue and Columbia valleys and it's a fine example of warm climate Syrah, although I much prefer the pepper and spice of cool climate Syrah myself.

My last stop of the day was Styring, a family-owned winery that Rachel and I had been to over Memorial Day weekend a couple of years ago. Our impression at the time was very nice people, pretty average wine, and today's visit reinforced that impression. The Styring family and their staff are all very nice people and made me feel very welcome. They were serving 5 wines, each paired with a snack. The first was their 2008 Pinot Gris paired with Prosciutto and melon (the fruit, not the varietal). The Gris was well made with pretty good acidity. Next was their 2006 "Signature" Pinot Noir with Italian Truffle cheese, and then the 2006 "WIT" Pinot Noir with black truffle oil and bread. This PN was pretty good, although a bit too big and fruity for my taste. They then poured their new 2007 Cab Sauv from the Columbia Valley and paired that with Champignon cheese and chocolates (always a nice pairing!). The wine was tannic and slightly bitter, but that may soften over time. Finally, they poured the 2004 "Afterglow" dessert wine - a wonderfully balanced sweet Riesling. This was paired with assorted tea cakes and was the best wine of the bunch.

On Sunday Rachel joined me after church as we headed out to some old friends and something new. We started with our own local winery, David Hill, which is literally about a 5 minute drive up the hill from our house. Every year they do a chocolate, Pinot and Port tasting featuring hand made chocolates by the tasting room manager Michele, and of course their great wines. This year they paired different chocolate offerings with one of their 2006 Reserve Pinot Noir, the wonderful 2006 Merlot, Jason's new Ruby port and the usual muscat port. All were excellent, although I thought that the muscat was slightly bitter by itself. However, it was an amazing pairing with Michele's chocolate with Grand Marnier.

We weren't sure where we wanted to go next, so we headed south toward the Dundee Hills (there's always good wine there!). We had tried Winderlea wines a couple of years ago just after they'd bought the old Goldschmidt vineyard and built their tasting room. At the time, we weren't very impressed, but wanted to go back and try them again since we know that great wine can come from that vineyard. Today they were pairing gourmet cupcakes with the Pinot and the tasting room was quite crowded. We found a spot at the bar that turned out to be right next to some swim parents that Rachel knew from another swim club. They were out tasting also, and we had a nice chat with them while we tasted. We started out with a wonderful 2007 Chardonnay - lightly oaked with great fruit (apple and tropical fruit) and good acidity - yum! This was followed by 3 Pinot Noirs, all of which were really quite nice. Either our palates had changed since we last tasted their wines, or the wine has improved. The 2007 Ana vineyard PN was earthy with red fruit, the 2007 Winderlea Estate PN was fairly light with subtle fruit, and the 2008 Dundee Hills PN had a hint of earthiness and bright red fruits. We discovered that their winemaker is Robert Brittan, whose own label PN we had tasted and liked at the Carlton Winemaker's Studio in January (oops, I forgot to write a blog entry about that!). All in all, a very pleasant surprise. By the way, we saved the cupcakes for the boys.

Just down Worden Hill Road from Winderlea is Crumbled Rock Winery, a relatively new kid on the block. The Juliard Vineyard has been producing great Pinot grapes for years and had been under contract to Dick Erath, but in 2007, the owners decided to build a small winery and start making wine commercially. 2007 was their first vintage under their own label, and it was pretty good. We also got to barrel taste the 2008, and I think it's going to be excellent. We'll be back once they've released it. Because they only had the one wine, they invited 2 other vineyard owners to come taste with them - Deux Vert and Cleo's Hill. We've been drinking wine made from Deux Vert grapes for years (Elemental Cellars and Roots to name a couple) and it was fun to meet the vineyard owners Mike and Patty Green. Mike was tasting a Melon de Bourgogne made by Macindoe Family Cellars, and was looking for the usual confusion on our faces when he mentioned the grape variety. Instead, we looked pleased, and said "OK, great." "You are familiar with Melon??" he said incredulously. We explained that we very much enjoyed Melon, and had tried various wines from Elemental Cellars, De Ponte, Panther Creek, and Roots. He was floored and took an instant liking to us. He meets one person every few months who has ever even heard of the grape, much less fans. Anyway, the wine was fantastic - crisp and acidic with nice clean fruit. His wife was also making Tempranillo from grapes on their property (another of our favorite varietals) and we tried both the 2007 and 2008. Both were great, but the 2008 was a standout with spice and pepper. We'll definitely make it a point to attend any upcoming events at their vineyard (they promised tapas in the vineyard this summer - how cool would that be!). The other vineyard making their own wine was Cleo's Hill. I could swear we've tasted them before, maybe at 12th and Maple, or somewhere else, but I couldn't remember. The vineyard owner said that we looked familiar to her, but she couldn't remember where either. They had a couple of very nice Pinot Noirs also. It's always so much fun to talk to the grape growers themselves, and we had a fantastic time here.

Our last stop of the day was Vista Hills - one of the most beautiful tasting rooms in the Willamette Valley. We've has their wine a couple of times, and it was good, but not great. They have their wine made by several different winemakers including Laurent Montalieu, Michael Stevenson of Panther Creek, and Isabelle Dutartre of De Ponte. Most of their Pinot Noirs that we've tasted made by Laurent have an incredible nose, nice mid-palate, and almost no finish (where did it go?), although today they had a bit longer finish. Michael's wines were all very good, but the surprise of the day was the last wine that wasn't even on the tasting list. We can usually build a pretty good rapport with the pourer if he or she knows anything about wine, and we had a great talk with the guy here. He told us he had one more wine that wasn't on the list that he'd be happy to let us try. It was their 2007 Saga Hills Pinot Noir, and it was wonderful - big and fruity for an '07, but very structured and well balanced with a long finish. We figured it was another of Michael's wines, but it turned out to have been made by Isabelle from De Ponte. This was surprising because we just haven't been all that impressed by De Ponte wines in the past, so we may need to go back and taste again sometime. With a trunk full of wine and smiles on our faces, we headed home.

Today was a day of pleasant surprises. We had expected David Hill to be good, and it was, but the other wineries all turned out better than expected. Winderlea and Vista Hills were places that we had visited in the past and had come away with our socks still on our feet, but today both exceeded expectations, and we'll no doubt be back again. Crumbled Rock, however, was easily the high point of the day - friendly people who are passionate about what they do, and some really nice wine. It was such a pleasure to talk with the Greens from Deux Vert, and we're really looking forward to Crumbled Rock's 2008 PN.
Posted by Twobones at 11:23 AM No comments: