OK, it's been a long time since I've updated this blog, but that doesn't mean I haven't been cooking, eating, and drinking wine.  Just a little too busy to keep up the blog.  A couple of months ago I decided that it was time to become a better bread baker, mostly as a result of reading Michael Pollan's latest book, Cooked.  In it, he chronicles the amazing process of transformation that is cooking, using as metaphor the 4 ancient elements: earth, fire, air, and water.  In his section on Air, he sets out to bake the perfect loaf of bread, and it inspired me to redouble my efforts.

Several years ago my mother in law gave me a book by Peter Reinhart (aka Brother Juniper) called Crust and Crumb.  It was a fascinating book, but seemed to involve more time and effort than I was willing to put in.  However, after going back to it, I decided that it wasn't so bad, and I would give it a shot.  He has since written several more bread books including his latest, Artisan Breads Every Day, which takes a lot of the principles he's developed over that past several years and distilled them into an easier overnight method that retains most of the benefits of his long pre-ferments in the previous books.

Since I'm already about 3 months into the journey, I'll summarize my progress so far in this post, and then try to keep up more detailed posts as I go along.  This is really driven by my need to take notes of what I've done for myself, but if anyone else finds it of interest, so much the better!

In November, I wanted to set down a baseline for my bread.  For a little over a year, my best effort with every day lean (French) bread used a recipe from Brian and Clare and Big Table Farm.  It's essentially a no-knead overnight bread that produces pretty good results.  So, I made a batch in November and it turned out pretty well.  I gave most of it to co-workers, and they seemed to enjoy it.

Here are the next batches that I made (as best as I can remember them) and my notes: 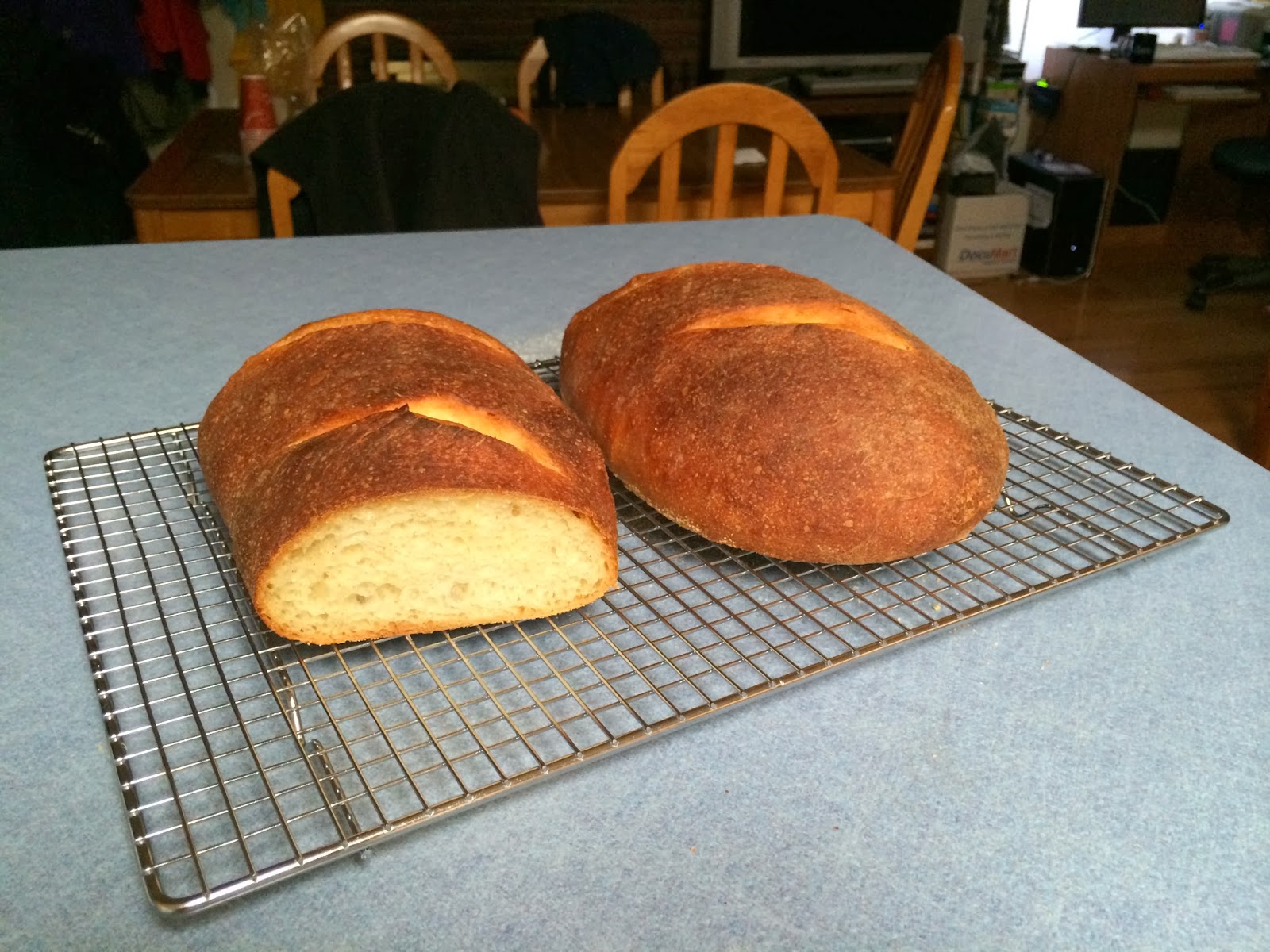 Dec 7th: Baked French Bread I from Crust and Crumb.  I made 3 loaves - 2 batards and one shaped in an oblong proofing basket.  I baked them on the pizza stone, and baked the 2 batards together, and then the other one.  The crumb was light and airy, and the crust was nice too.  I think it was better than the Big Table recipe (but takes much longer).  Our oven seems to run slow, so I had to increase baking time. 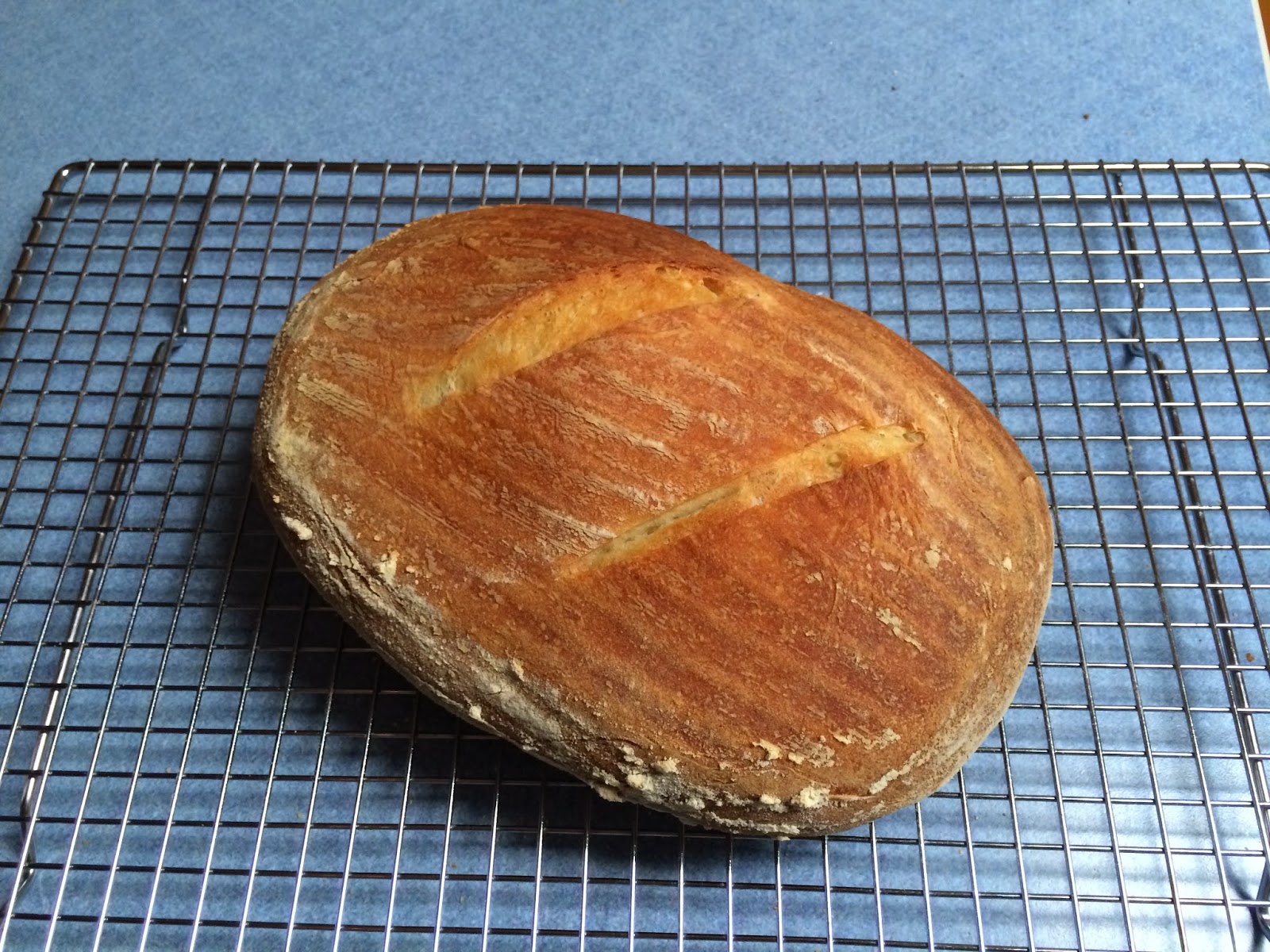 Around this time I was also trying to get a native yeast starter going, but failed after 3 attempts.  I still need to try this again, and it seems that Brother Juniper has updated information about this in his latest book, indicating the need to add some acid to the starter.  We'll see.

Next up was an attempt at some whole grain breads.  As Micheal Pollan says, "The whiter the bread, the sooner you're dead"! 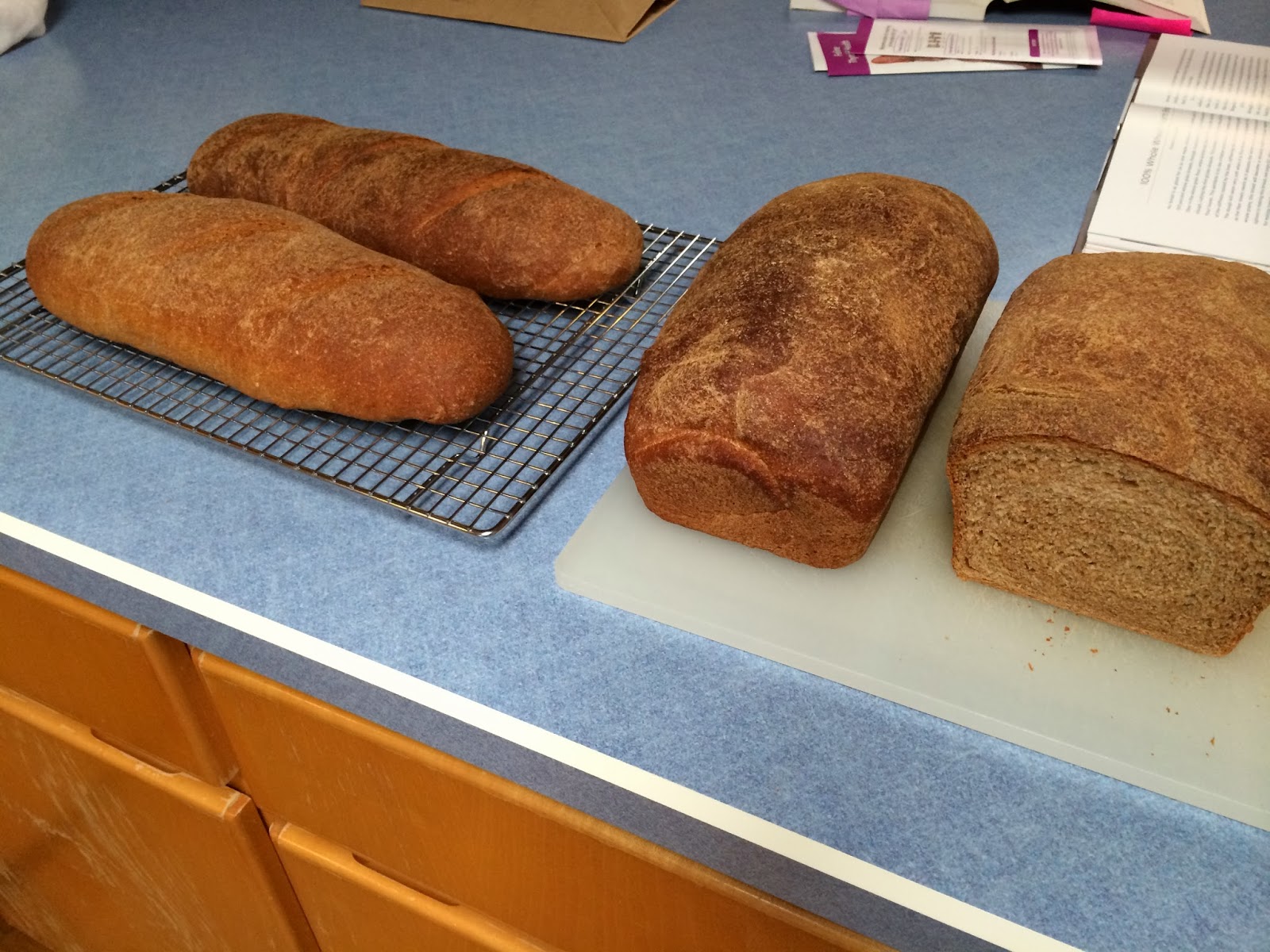 Dec 30th: I went all out and made 2 different breads - Everyday 100% Whole Wheat Sandwich Bread, and 100% Whole Wheat Hearth Bread, both from Artisan Breads Every Day.  These are very wet doughs, and use his new "Stretch and Fold" method rather than traditional kneading.  The results were spectacular for the sandwich bread, and not too bad for the hearth loaf.  The problem is that while the whole wheat bread is better for you, it just doesn't work with pasta or other things where you've gotten used to white French bread.  That said, the hearth bread was really quite good. 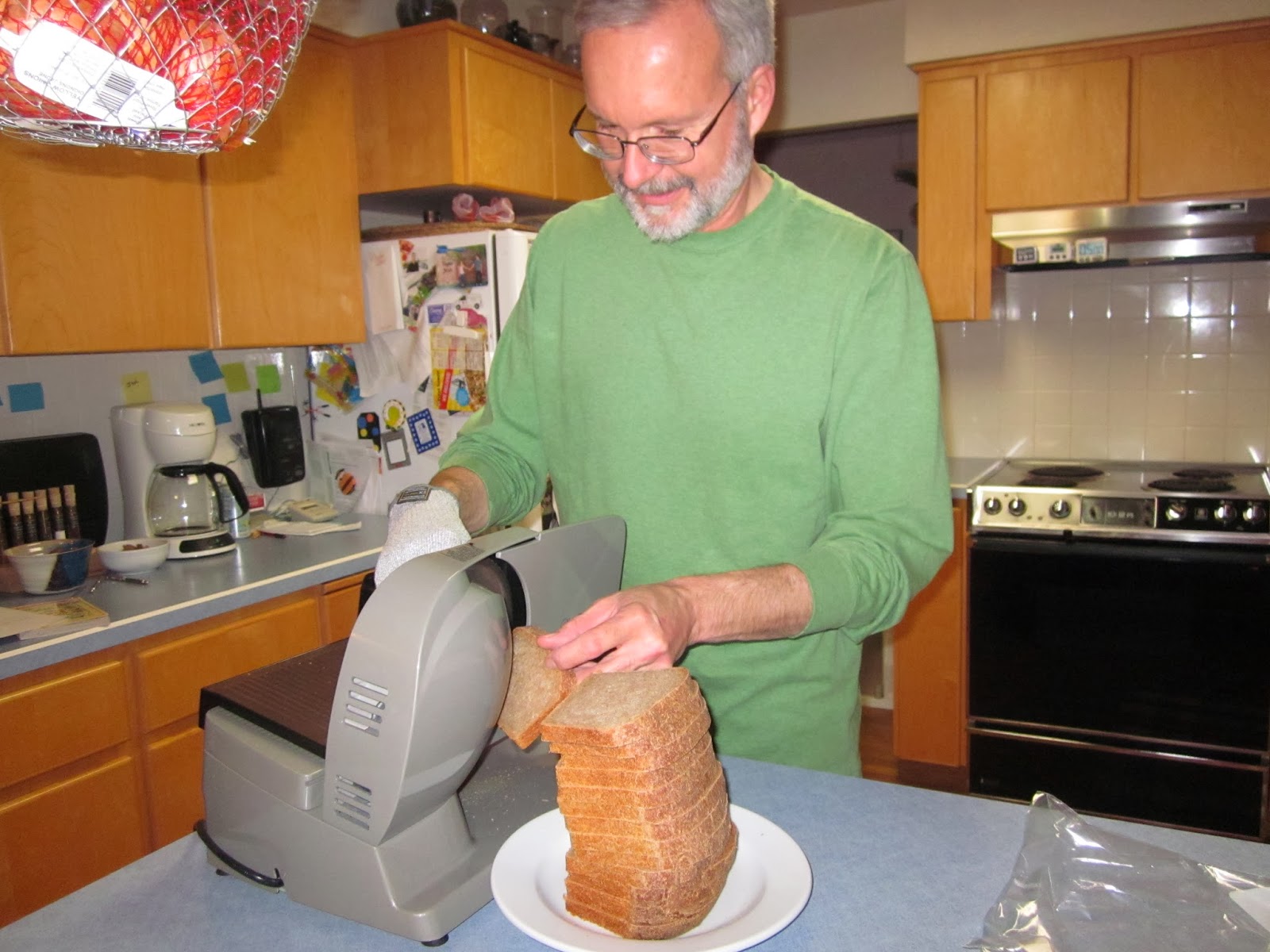 I was also able to use my new food slicer to make perfect sandwich slices out of the sandwich bread!  There's nothing to note here, other than that I hope the next batch turns out as well as the first.  I used the dark metal loaf pans and followed the directions.  For the sugar option, I used plain old granulated sugar.  Rachel and I agree that this is the best WW sandwich bread we've found so far.

Next up was an attempt to make a better french loaf using the overnight method...

Jan 25th: Made Classic French Bread from Artisan Breads Every Day.  This is a dryer dough, and Brother Juniper says that this requires a "light but firm touch" whatever that means.  It uses traditional kneading rather than stretch and fold.  I made 4 small batards and baked them all together on the stone.  They ended up being somewhat underdone and the taste wasn't all that interesting.  Also, the crumb was tight and even - not something you want in a rustic bread.  All in all, not as good as the previous effort. 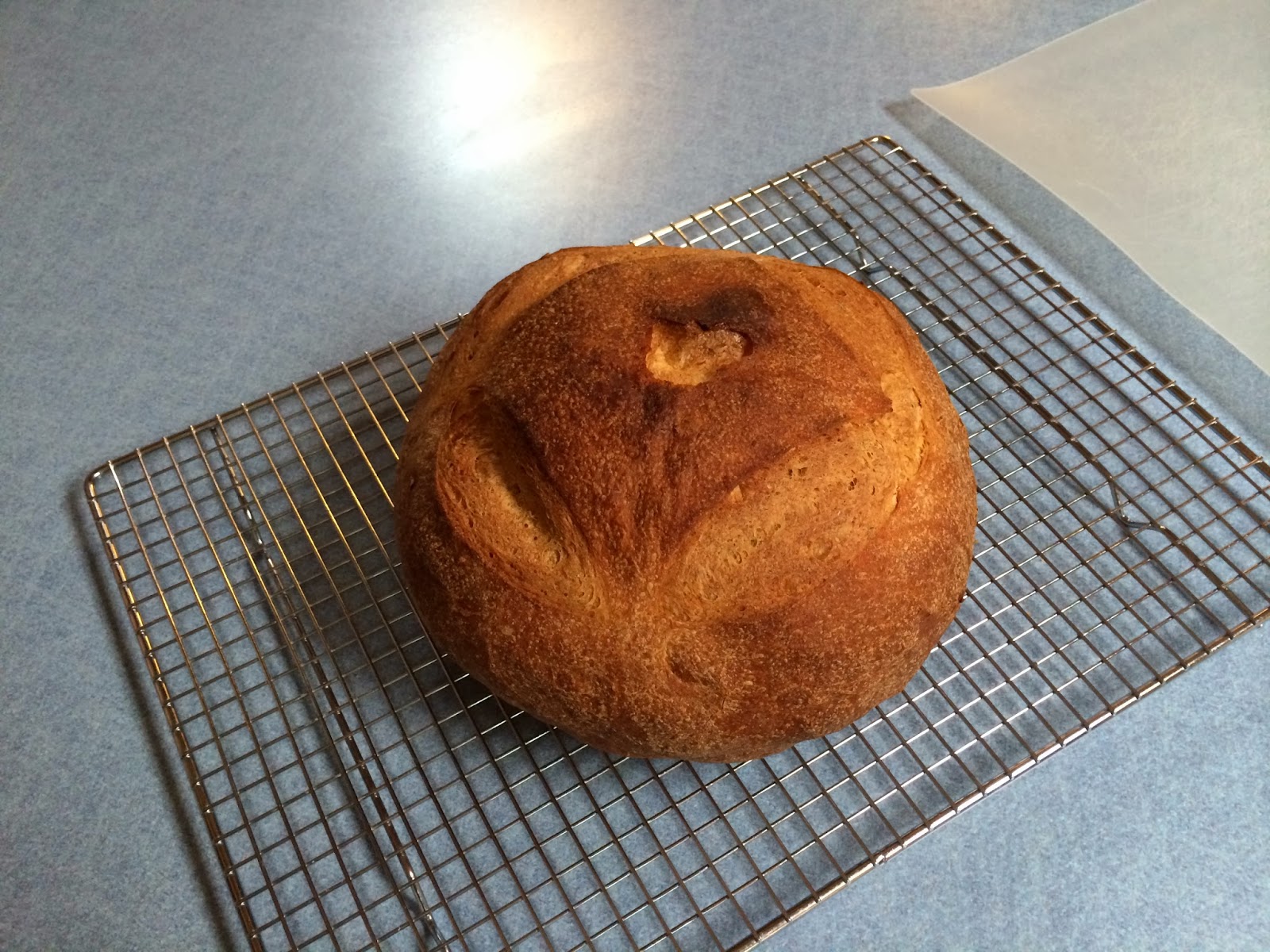 I also made rye sandwich bread using a recipe from the Smitten Kitchen website: http://smittenkitchen.com/blog/2010/01/new-york-deli-rye-bread  It uses an interesting sponge pre-ferment where you add the rest of the dry ingredients on top of the sponge.  I used dark whole grain rye flour from Bob's Red Mill instead of the standard light rye that the recipe calls for.  I used honey instead of malt.  It was a beautiful loaf, and it tastes pretty good.  Again, I fear that it is slightly underdone, but maybe not.  I ended up slicing it and freezing it all for pastrami sandwiches (using home made pastrami that I just finished today!).  I'll report back on the rye bread after we've had a chance to make sandwiches out of it.

Jan 26th: Made Lean Bread from Artisan Breads Every Day.  This is another wet overnight dough using the stretch and fold method.  Again, I made 4 smaller batards and again baked them all together on the stone, and again the center was underdone.  Rachel pointed out that the problem is likely that they are just too close together.  Given that the side crusts are not golden brown and delicious, I think she may be right.  The top crust is certainly as done as I'd like it, so next time I'll just bake 2 at a time (or get a bigger stone!).  That said, this bread is delicious and has a larger more uneven crumb.  This is the best so far.  I also left it in the fridge for about 20 hours rather than 12, and I think that helped with the flavor development as well.

Ah, one other thing: pizza crust.  I'm looking for a) the perfect pizza crust, and b) a whole wheat version that isn't awful.  On the second point, I tried this recipe: http://www.tablespoon.com/recipes/100-whole-wheat-pizza-crust/a1b4fa8d-1f67-4955-8fe7-96649a7186e7 and was quite happy with the results.  For whole wheat, it wasn't bad.  Maybe next time I should try it with about half white flour...

So, that gets us up to date.  Lessons learned so far: