The Big Eclipse - Part 1: Where to go 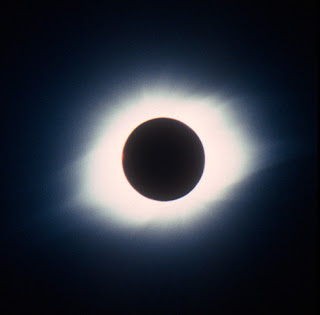 By now you've all probably heard that there's going to be a total solar eclipse visible across the US on August 21st of next year.  The news stories started appearing almost a year ago, and the coverage has been getting more intense every month.  I've actually been looking forward to this eclipse since I first found out about it about 15 years ago.  This is one you definitely don't want to miss; I've seen 2 total solar eclipses (and been clouded out for a third), and they are one of the most amazing spectacles of nature that you'll ever witness.

Because I've been getting so many requests for advice about the eclipse, I thought I'd cover it here in the next 3 or 4 blog posts.  I'll cover topics including where to view, what to bring, how to safely view the eclipse, and what to expect during the eclipse itself.  This particular post will focus on where to view since it's not too early (and may be too late in some cases) to start planning your travel.

Let me first say that unless you happen to live in the narrow (about 60 miles wide) path of totality, you won't see a total eclipse.  Rachel compares a total eclipse to being pregnant.  It's either total or it's not - there so such thing as "mostly total".  Even if you live close to the path of totality, you'll only see a deep partial eclipse which is absolutely, completely, and in every way NOT a total solar eclipse.  If you're even slightly considering not traveling into the path of totality, please contact me so I can talk you out of it.  Please.  So, most of us are going to need to travel.  But where? 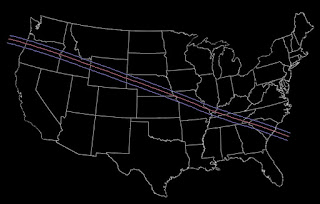 NASA has a wonderful interactive Google map showing the path of totality here: http://eclipse.gsfc.nasa.gov/SEgoogle/SEgoogle2001/SE2017Aug21Tgoogle.html  As you can see, it stretches across the US from Oregon through the midwest, and leaving in South Carolina.  It passes over some major cities such as Salem, OR, Idaho Falls, ID, Jackson and Casper, WY, Kansas City (barely), Columbia, MO, Nashville, TN, and Charleston, SC.  The other important point to note about this map is that the closer you are to the centerline (the red line on the map), the longer the eclipse will be.  The 2 blue lines show the limits of totality, but if you're right near that blue line, you may only see a few seconds of totality as opposed to around 2 minutes at the center.  So as you think about a location, choose one close to the centerline if possible.

Weather is also a consideration.  Fortunately August is generally pretty good weather-wise across most of the path of totality.  But of course some places are better than others.  A good set of maps and charts describing historical cloud cover for August can be found here: http://www.eclipse2017.org/2017/weather/2017_clouds.htm  For those in Oregon, Salem actually isn't bad, while the coast is riskier (but it would be amazing to watch from the beach).  Of course these are only averages, and the weather on the actual eclipse day could be anything.

Your next decision is whether or not you want to try and stay somewhere overnight or just drive on the day of the eclipse.  In Oregon, the eclipse starts around 9am, with totality about 10:20 am.  If you live close to the centerline, this gives you plenty of time to drive to your location, watch the eclipse, and drive home the same day.  This means no overnight accommodations are needed, and you can change your destination at the last minute in case of local clouds at your chosen spot.  However, if you plan to view more than a few hours from home, you'll probably need to travel the day before and stay overnight.  Unfortunately many (most?) hotels and campgrounds along the centerline are already booked.  But that doesn't mean you can't try.  You can also try to book lodging an hour or 2 away from centerline and drive to your viewing site that morning.  But if you do plan to stay overnight somewhere, start making arrangements now.

OK, you've decided approximately where you're going to be.  But where, exactly, are you going to view from?  Fortunately the sun will be fairly high in the sky for everyone in the US, so you won't need to find a place with good views to the horizon. I recommend a nice grassy park somewhere, but anywhere will work.  We watched an annular eclipse from the balcony of a motel a few years ago.  The entire eclipse from beginning to end lasts a little over 2 hours, so if you're going to watch the whole thing, be sure to pick someplace that you can stay around that long.  We have also found it really great to view with a crowd, especially if some of them have telescopes fitted with a solar filter.  Check with science museums and astronomy clubs in your area to see where they are having viewing parties. But be aware that organized events like this are likely to be very, very crowded.  Again, a public park might just be perfect.

In my next blog, I'll discuss what you might want to bring to the eclipse.  Some items like solar glasses are a must and may be in short supply, so you'll want to order some soon.  In the mean time, if you have questions, post them here and I'll try and answer them.

If you're local and would like to find out more about what it's like to see a total solar eclipse, we have a great video (on VHS!) made during the 1991 eclipse in Mexico that really does a great job of communicating the excitement of a total eclipse.  This was my first successful solar eclipse, although we viewed it from a ship off of Mazatlan.  If you have a VHS player, you're welcome to borrow it.