The Big Eclipse - Part 4: What to Expect

This post will start to cover what you can expect on eclipse day itself.  It's going to be a very exciting day, and parts of it will fly by so fast you may miss things if you don't know to look for them.  I'll cover the partial phases in this post, and then the moments right before totality and totality itself in the next one.

First, it helps to remember and visualize what's actually happening here.  The moon orbits the earth in approximately the same plane as the earth and sun.  That means that every 29 and a half days the moon gets between the earth and sun.  However, the moon's orbital plane isn't exactly the same as the earth and sun so usually rather than getting right in front of the sun, it is slightly above or below the sun so we don't see a solar eclipse every month, we just get a new moon.  However, every once in a while, new moon occurs at those points in its orbit that do fall exactly between the sun and the earth, and we get a solar eclipse.  The next very cool fact is that even through the sun is much, much larger than the moon, it is also much further away.  In fact, the size of the moon and size of the sun and their distances from the earth just happen to work out so that the moon appears to be exactly the same size as the sun when viewed from earth.  Actually, depending on where the moon is in its orbit, it may appear slightly larger or slightly smaller, hence annular eclipses vs. total eclipses.  As soon as you get your safe solar filter, go outside and look at the sun through it.  It is the same size as the full moon!  Cool, huh?

For the next hour or so, you will see the moon continue to move in front of the sun, blocking out more and more of it.  There are several things to look for during this time, especially as totality approaches.  First, it's going to get darker, but not as much as you might think.  The sun is very bright, and even when some of it is still showing, there will be plenty of light. 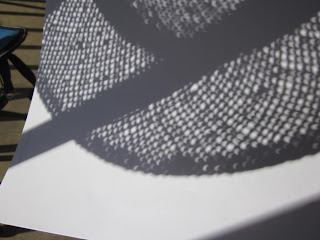 It's really important to continue to use your safe solar filter during the entire partial phase of the eclipse.  But now is also the time to look for as many "pinholes" as you can find around you and use them to project images of the crescent sun.  Good places to find pinholes are saltine crackers, your straw hat, and overlapping tree leaves.
Look at the sun filtering through the leaves of a tree on the ground underneath it.  Can you see overlapping images of the crescent sun?

You may also notice that shadows are a lot sharper and crisper as the sun's crescent gets smaller and smaller.  Because the sun is normally about half a degree on the sky, shadow edges are slightly blurry because light from all parts of the sun pass by the edge of whatever is making the shadow, but as the crescent gets smaller, the shadow edge gets crisper.  Because of this, the quality of the light is also very strange.  Look around you - it's darker but not like a normal twilight.  It's hard to describe, but you'll certainly notice the difference.  The air will get a lot cooler too.

If you have binoculars or a telescope with a safe solar filter, be sure to look for sunspots during the partial phases.  It's fun to watch the edge of the moon move toward the sunspots and "eat" them.

Also, notice how animals around you react to the eclipse.  As it gets darker, birds will return to their roosts and may start singing as they would in the evening.  We've seen porpoises dance in the ship's wake as they do in the morning and evening.

As I mentioned, the partial phase from first contact to totality will last about an hour and 15 minutes.  Use whatever safe viewing method you've chosen to check on the moon's progress every few minutes, especially if there are sunspots.  And take the time to look around and observe your surroundings.  How soon could you tell that something strange was going on if you didn't (safely) look at the sun?

As we are just a few minutes away from totality, the pace picks up and there's a lot to look for.  I'll cover this in my next post.
Posted by Twobones at 10:06 AM