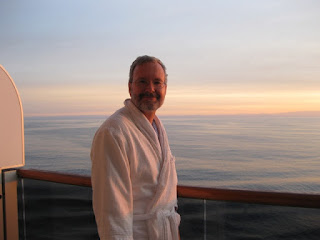 We had slept with the curtains open, and when we woke up early on Sunday morning we could see the rising sun coming through the window. Wait a minute, we're on the starboard side of the ship and we're heading south to Mexico - we shouldn't be able to see the rising sun! Either the earth was spinning backwards or we were heading north, not south. We figured it was the latter, but also figured the captain knew what he was doing. One advantage of a verandah cabin is that you can pop outside in your robe to watch the sunrise.

Rachel and I went up to breakfast (the boyz were still asleep and would likely stay that way until 11 or noon) and ended up sharing a table with a woman traveling alone; her friend had broken her leg just before the cruise and had to stay home, so she had the room all to herself and didn't mind. It turns out that she had been a cruise lecturer for many years and had traveled all over the world. Quite interesting. Very soon after we sat down, the captain came on the speaker: "Good morning. This is your captain, Arjen van der Loo, speaking to you from the bridge of the Oosterdam." This is how he started every announcement during the entire cruise. It turns out that there had been a medical emergency with one of the passengers, so we had turned around and were heading back toward San Diego to meet a coast guard helicopter that was to pick up the passenger. So, that's why we had turned around. We didn't get to see the whole thing because we were at breakfast, but apparently the helicopter came in and hovered over the ship and hoisted up the passenger to transport them back to a hospital in San Diego. Once that was accomplished, we turned back to the south and fired up another engine for speed. To finish with breakfast: I had very nice eggs Benedict, but they took forever to arrive - the steward even came to apologize that the Hollandaise sauce was taking so long.

After breakfast, Rachel decided to call the gym and set up an appointment with a personal trainer. Unfortunately, like so much on this large ship, they were fully booked. By this time she was pretty crabby - no movie last night, no appt. with a trainer, the carpet in our stateroom was worn and stained, the floor of the bathroom was marred and scuffed, and the food wasn't spectacular. Either our expectations had been too high, or Holland America had gone downhill. At this point we were thinking that maybe this was our last cruise on HAL. Rachel then noticed that there was a free aerobics class offered and she went off to that, and I headed out toward the Culinary Arts Center (aka the Queen's Lounge with a kitchen set on the stage) for a cooking demo. 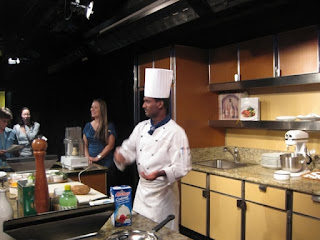 The cooking demo was holiday appetizers and was taught by the Pinnacle Grill chef Mahendran Sethupathy who trained in India. The chef was introduced by Candace, the ship's "party planner." I didn't even know that cruise ships had party planners, but we would end up attending a lot of events hosted by Candace. The kitchen set is fully functional with sinks, a stove, oven and microwave, and is rolled out onto the Queen's Lounge stage whenever a cooking demo or class is given. Today chef Mahendran demonstrated an apricot and rosemary chutney served with apple and warm brie, and an elegant twice-baked potato with goat cheese. He was very engaging and focused on presentation on the plate. I enjoyed the demo very much, but later found out that he was also teaching hands-on cooking classes but you had to sign up as soon as you got on board and were now full. Rats!

I went back to the room after the demo and Rachel was back from her workout feeling much less crabby about everything. It's amazing what a little exercise can do for a person. Soon it was lunch time and we headed off toward the main dining room. There are many options for meals on the ship ranging from a self-serve buffet of hot dogs, hamburgers and tacos at the Terrace Grill on Lido deck to the high end and fancy Pinnacle Grill. We generally prefer sitting down and having someone bring our food to us, but not wanting it to take hours, so we usually ate our meals in the main dining room. I believe that the boyz joined us for this particular lunch.

After lunch we had our first of 2 sit-down wine tastings on the ship held in the Culinary Arts Center. For this tasting, they had set up about 6 long tables on the dance floor and also used the seating space behind it. At each place setting there was a little bread and water along with 4 wine glasses. As Candace welcomed us to the tasting and introduced Bernie, the ship's cellar master, several of the ship's bar staff poured the wines - 2 whites and 2 reds. Bernie then talked about how to taste wine - observing its color and legs (which he erroneously stated indicated the alcohol content), then swirling and sniffing, and finally tasting. We tasted through 2 Chardonnays - a Washington state and a Burgundy, and then a Washington Cabernet Sauvignon and a ???. We were finally taught the right way to do a toast - tilt your glasses at an angle to each other and tap then fairly hard in the middle, not near the rim. It was a fun class, although there was some dubious information given. 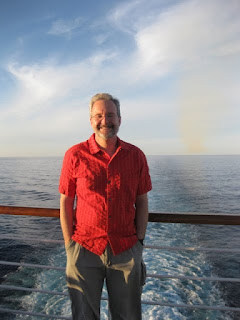 We checked with the front desk about bridge tours, but apparently that hasn't been done since 9-11 (wow, it has been a long time since we've been on a cruise). The boyz and I decided that maybe we should workout too, so we headed for the gym around 3:00. Because of the large number of passengers on the ship, the gym was crowded, but we managed to find some equipment to use. Josh and Tim rode the stationary bikes, and I did my usual weight workout and then rode a bike. There's just something wrong about going to the gym on a cruise, but if you want to eat like we do...

Dinner was the first of 2 formal nights on the ship, so we all got to play dress up. Tim grumbled and Josh came out looking like James Bond in his black suit and bow tie. Everyone else looked great too. The dining room chairs had all been covered with white covers for the night, but to me, rather than looking formal, it looked like someone had put sheets over everything to keep the dirt off the furniture. Not the look they were going for! Oh well, it was another great dinner with Yaya and Rono keeping everyone happy, especially Sami. As Yaya took each persons order, he would say "excellent" as his way of acknowledging that he heard you. This became the keyword for each meal as we asked him if our choices really were excellent. My father's choices were all met with "double excellent!" We accompanied our dinner with a nice 2005 Pommard - too early to really show it's best, but good anyway. 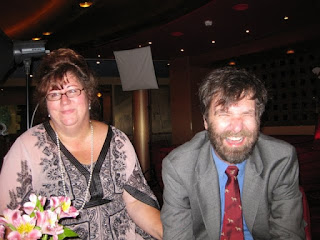 After dinner, we decided to skip the captains welcome toast and instead do some bar hopping to listen to the music at each place. We went out on deck too, but it was still a bit cold and windy. I think this was the first night John and Kitty went with us, after dropping Sami off at Club HAL. We heard the string quartet again, and of course the Halcats. This may also be the night we stopped into the piano bar and decided that WT Greer was OK. He has just an amazing voice, but tends to put too much personal spin on each song. We also heard the Neptunes - a jazz trio. Another great day on board.
Posted by Twobones at 8:53 AM