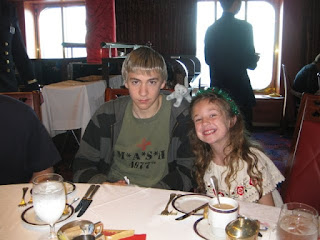 Last night at dinner John had suggested that we should all have breakfast as a family on Christmas morning. All of the adults thought that this was a fine idea, but of course that would mean that the boyz had to get up before 11 am. "Seriously?" asked Josh. Yup, seriously. Rachel had of course gotten up early to go to the gym, and I called the boys' room around 7:30 to get them up. I met my parents on the way down to the dining room, and Rachel would join us as soon as her aerobics class was over. It turns out that many people had the same idea because there was quite a line to get into the dining room. We had been standing in line for about 10 minutes when Rachel joined us, and in another few minutes, Josh came wandering out of the dining room looking for us. It turns out that they had gotten there early and reserved a table for us, so we bypassed the rest of the line and joined them. John, Kitty, and Sami were already at the table too. Sami had some toy kittens with her, and enjoyed putting them on Tim's shoulders. Tim as still enough asleep that he didn't even notice at first. 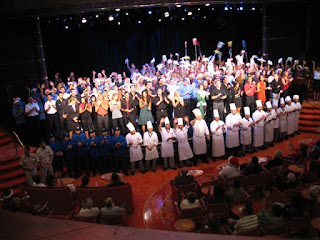 After breakfast, I went to hear the disembarkation talk. This is where the cruise director tells everyone about putting their luggage out for pickup tonight, and to not forget to leave something out to wear the next day. It's also where the tried and true cruise jokes are told: "You came on as passengers, but your going off as cargo" and so on. She also told a story of meeting a room service steward in the elevator one morning with a HUGE amount of food. She commented about the amount of food and the steward replied that it was all for one room, and they didn't even order it. "Didn't order it?" she asked. Apparently these people had thought that the room service breakfast card was a questionnaire, not an order form. Hmm... After the talk, the staff and crew came onstage to sing a final farewell song - that was pretty cool. All the cabin stewards came out with their best towel animals.

At 11:00, Rachel and I joined my parents at the captain's brunch for the Mariners Society - people who have cruised with Holland America before. This is our 4th Holland America Cruise, making us "one star" mariners. My parents have been on a lot more, and they are "three star" mariners. The brunch was fine, although the Champagne was not nearly as nice as the Veuve Clicquot that we'd had earlier. We shared a table with an older couple and their grown daughter, and my father and the man talked about their time in the navy and compared hearing aids. It was pretty funny. Near the end of the meal, the man mentioned that if we got a chance, we really should go see the USS Midway in San Diego. I mentioned that we had already done so, and he got very excited, whipping out a photograph of a bench on the flight deck that was dedicated to him. He had been part of an air wing that flew the F-8 Crusader that was on display on the flight deck. I remember looking at that plane when we were on the Midway, so it was pretty cool to have met someone in that air wing. 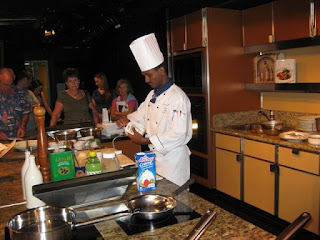 After the brunch, Rachel and I went to the Culinary Arts Center for another cooking demo. At this one, Mahendran, our Indian chef, was going to demonstrate how to make latkes. Rachel thought it quite amusing that an Indian chef was going to demonstrate Hanukkah food on Christmas day to a ship full of gentiles. Since there were relatively few people at the demo, we were allowed to come up and gather around the kitchen set, so we got a great view of the cooking. He showed a more or less traditional latke (too much flour, we think) and also an interesting butternut squash variation. Unfortunately, there weren't any samples to be had, but I'll probably try making the butternut squash latkes sometime. Of course I still have to make our traditional latkes, probably while Margaret is here.

After the cooking demo, Rachel went back to our room to take a nap (unbeknownst to me, she had a cold) and I decided to wander the ship for a while. I ended up on deck 10 just outside of the Crow's Nest. It's an open area of outside deck with nice lounge chairs. I had picked up my daily Sudoku (yes, I'm getting hooked too) and settled in while looking out over the ocean. Shortly one of the bar staff appeared and I ordered a nice non-alcoholic margarita. This may not have been the smartest move, because by this point in the cruise, the weather was starting to turn cold again, and sitting outside in the cold with a frozen drink isn't necessarily the best idea. Oh well, I managed to stay warm enough and had a very nice relaxing time. 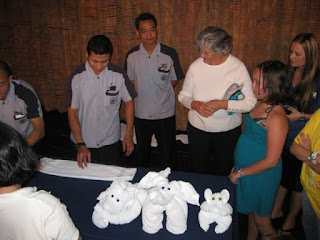 A little before 3 I went down to our room and Rachel was waking from her nap. It was time to watch the towel folding demo (did I tell you we had a busy day, or what?). Three room stewards demonstrated how they make some of those marvelous towel animals that we found on our bed every night. They did a dog, an elephant, a koala, and of course the ever popular hanging monkey. Although I watched them do it, I don't think I'm quite ready to try it myself. Maybe I can get a book...

At 5:00 Rachel and I headed up to the Crow's Nest armed with a couple of Holland America cruise books to plan our next cruise. We're thinking Hawaii in January of 2011 (any takers?) We also went up to listen to Taylor Brown play guitar. This guy is so versatile! We've heard him play the blues and popular tunes, and now he was playing classical. It turns out that they also serve hors d'oeuvres in the Crow's Nest before dinner, so we had quite a nice 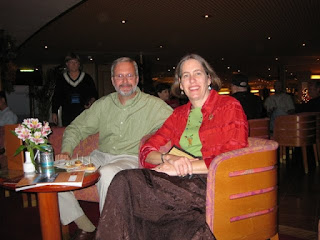 time. It was also really nice to watch the sunset and the darkening sky from up there.

We went down to our final dinner on the ship - it was a sad parting from Yaya, Rono, and Mydel. We then went back to our rooms to pack. This was truly sad; the cruise was really almost over. 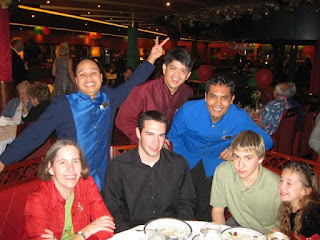 After we were packed, we went and visited with my parents for a while in their room. John and Kitty finished packing too, and called to find us. They were already in the Queen's Lounge listening to the Halcats. We (me, Rachel and Mama) headed down to join them. We had noticed that their first set was over at 9:30, so we knew that as soon as we got there, they'd go on break. 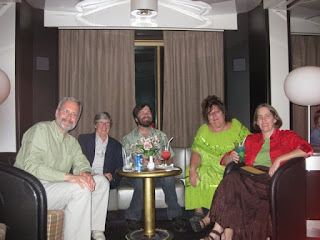 Sure enough, John had ordered his Mai Tai and they were done! The 5 of us then moved to the piano bar and listened to WT Greer for a while. Around 10:00, Mama was ready to go back to her room, John and Kitty needed to pick up Sami from club Hal, and Rachel and I decided to head up to the Crow's Nest to hear Taylor one last time. He played some soft acoustic guitar until 11:00 and we realized that we'd been dozing during the last few minutes anyway. It was time to head off to bed. We bought a CD from him before we left. 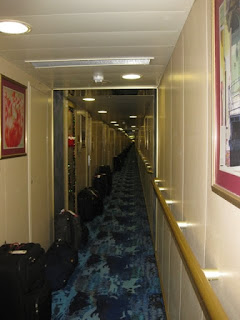 As we walked through the halls, everyone had put their suitcases out for pickup. We did the same, and within a few minutes, they had been whisked off by the crew. We had payed a little extra and gotten them checked directly through on our flight, so we wouldn't have to worry about them again until we arrived in Portland (we hoped).
Posted by Twobones at 9:42 AM