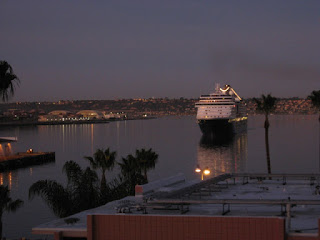 What a terrible feeling - waking up and realizing that in a few short hours you'll be off the ship. I woke up very early and went out onto the verandah to watch us pull into San Diego Bay. We slipped silently past the USS Ronald Reagan in the dim morning twilight, and then slowly headed to our dock. I remembered how a week ago at this same time I'd been watching the ship come in from the previous cruise, but this time instead of preparing to board, we were preparing to depart.

Around 7:00 I called the boyz room to get them up, and we all went sleepily down to breakfast. I had avoided ordering the beef hash all week. I love beef hash, but restaurants usually want to do something strange to it, and I end up preferring the stuff in the can. Well, I ordered it for my last breakfast on the ship, and it was very good. Probably just as well I didn't find out earlier, since it's not the healthiest thing you can have. 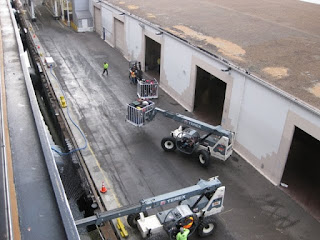 After breakfast we returned to our verandah and watched the dock workers unload luggage, etc. Unlike previous cruises where they want you out of your cabin by a certain time, we were allowed to be pretty much anywhere on the ship until it was our time to get off. We watched a little of the shore excursion video on the TV, and basically savored our last moments on the ship. Our disembarkation window was 9:30 to 9:45 and there was a short line to get off. Fortunately, all immigration issues are handled between the ship and the port authorities before anyone is allowed to leave, so there was no need to go through immigration. We simply got off, went down the stairs, turned in our customs declaration and left. Because we had checked our bags through to the airline, we didn't need to stop for luggage either. It took us several attempts to find the correct bus outside (the Holland America pier staff in San Diego are not very good), but we boarded the bus and headed to the airport.

We arrived in plenty of time, and in spite of the terrorist bomb attempt the day before, had no trouble getting through security. We sat around at the gate for about an hour and a half reading, napping, and eating lunch. The plane actually started boarding early, and they wanted everyone in their seats quickly to try and get an early departure. I don't know why, but I didn't mind. The flight was uneventful, and we landed at PDX about 30 minutes early. I went to get the truck from the parking lot while Rachel and the boyz collected the luggage. Yes, it all made it just as it was supposed to.

Traffic was heavier than I expected for a Saturday afternoon, but we finally made it home. Phil had come to the house while we were gone and fixed the carpet; it was such a great feeling to see our bedroom whole again - thanks Phil! I put our bed back together and moved the furniture back in and all was well. We heated up some BBQ meatballs that we'd frozen before we left and had a nice dinner. Sadly, Rono was not there to clear the table. We also baked a frozen pumpkin pie just so we didn't go cold turkey off the sugar train! 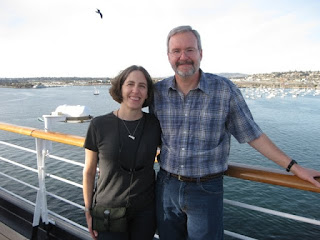 It was a great cruise, and I really enjoyed having the whole family there. We all had decided that we'd not try to coordinate too many activities, and let everyone do their own thing, and I think that worked out very well. We really enjoyed hanging out in the bars in the evening listening to all the different musical groups on the ship, especially when John and Kitty could come with us. We probably saw more of them this Christmas than we usually do when we're in San Gabriel, and that was nice. It was great having dinner all together every night too, in addition to a few breakfasts and lunches with my parents. I wish the boys had taken better advantage of being on the ship rather than just sitting in their cabin watching TV all day, but perhaps that's their idea of a great vacation. They did get to have their private lunch with Grandma, and she was able to get Josh off the ship for a short while in Cabo. Sami probably had the most fun of anyone - making new friends at Club HAL, wandering the ship with Josh, turning Yaya into melted butter whenever he saw her, etc. She did amazingly well, especially being able to sit for an hour and a half dinner every night. Not too many 6 year olds could have done that.

Things to remember for the next cruise:

1. Bring binoculars
2. Sample all the musical acts early on - don't write anyone off until you've heard them a couple of times.
3. The early dinner seating works well even if you don't have kids with you. More time in the evenings to hang out and listen to music.
4. The Crow's Nest is a great place to be before dinner.
5. Book any gym classes and/or cooking classes the moment you get onboard, if not online. They fill up very quickly.
6. We like smaller ships. 1900 passengers was too many and it felt a bit crowded.
7. Use the signature express baggage service to have your luggage checked through to your final destination if available. It costs, but it's so nice not to have to deal with luggage when you get off the ship.
8. Don't bring so many clothes. Pack things that can serve double duty. Remember a light sweater too. Don't forget to pack for active shore excursions, not just for the ship.
9. Finally, don't wait another 11 years to go on another cruise. How about Hawaii in Jan 2011?
Posted by Twobones at 9:47 AM