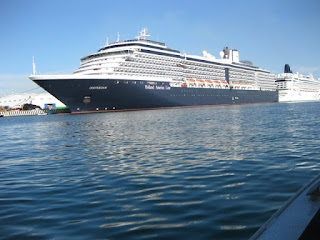 After 2 glorious days at sea, we were ready to visit our first port. I like to say that I was born to be at sea, and I'd much rather be out on the open ocean than docked somewhere, and I really wasn't looking forward to any shore excursions. However, we had booked one at each port, so I was ready to face it. Rachel was up early again and saw us pick up the harbor pilot (he just jumps from a small boat onto a ladder on our ship!) and come through the breakwater in Mazatlan. I was up in time to see us tie up at the dock. The dock at Mazatlan isn't very inviting, and in fact is a working containerized cargo port. In order to get passengers from the ship through the vast sea of cargo containers to the actual tourist terminal, there are small trams that drive back and forth. According to the signs on the tram, th 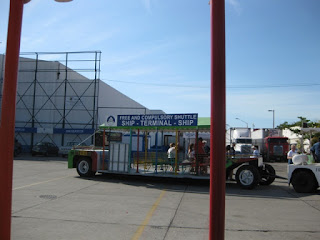 ey are "free and compulsory."

We had signed up for the "Thrilling Jetboat Adventure" and were thrilled to see that not only did the tour start at 9 am, but was only an hour and a half - leaving most of the day on the ship! As Garfield would say, "Maybe this story do have a happy ending after all!" I called the boys' room to wake Tim up since he was coming with us. Josh decided that he wanted nothing to do with any shore excursions and was content to sleep until noon and then watch TV all day and night. Tim joined us for breakfast in the dining room, where we finally realized that if anyone at the table ordered the yummy eggs Benedict, the whole breakfast took longer. I guess they're still having trouble with that Hollandaise sauce. 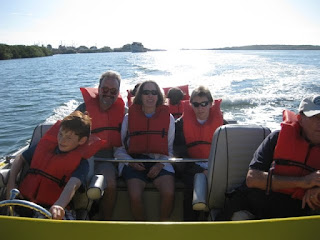 After breakfast we headed down the gangway for our jetboat adventure. Once everyone who was going (7 of us) had arrived, they put us on one of the free and compulsory trams and took us to the terminal. There, we boarded a van that would drive us to the dock. It turns out that while the jetboat ride would indeed be thrilling, it did not come close to the terror of the short van ride to the dock. I guess those lines on the road don't really mean anything in Mexico... 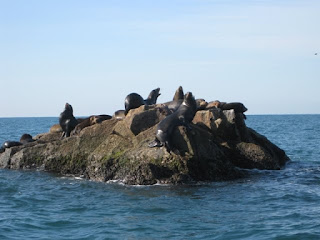 Anyway, we arrived safely at the dock and met our captain and guide for the jet boat. He was actually the owner of one of the larger sport fishing fleets in Mazatlan and had traveled to Oregon a year ago and had this jet boat made for him in Medford. Small world! He was an excellent guide, and in addition to thrilling 360 degree spins, sudden stops, and high speed turns, he gave us a great tour of the harbor and inlet. We saw the shrimp and tuna boats, the Pacifico beer factory, the mangroves and many birds including pelicans, herons, and ospreys. We then went out past the breakwater and saw some cool rock formations and sea lions. It was really an excellent tour, and we were back on board the ship by 10:45.

Rachel and I headed to the culinary trivia contest while Tim went back to bed. There were probably 15 or 20 people at the contest and we divided into teams of 2 or 3 people. Rachel and I teamed up with another woman, and between the 3 of us got most of the questions right, making us the proud winners of some Holland America key chains (not to mention bragging rights). 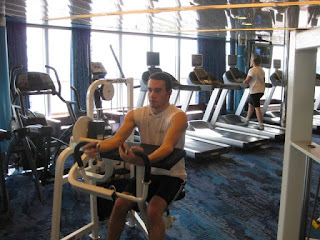 I can't remember what we did after lunch, and we've lost our copy of the daily program for day 4 so I can't look at it to jog my memory. I do know that the boyz and I went to the gym to work out again, hoping that it would be less crowded while people were ashore in Mazatlan (it was). It gave us a rare opportunity to see Josh outside his cabin. While we were in the gym, Rachel went to the spa and got a facial. I also remember that I enjoyed walking the decks and even had a taco at the taco bar. That afternoon I worked my first Sudoku puzzle, and I can see why so many people enjoy them. The sad thing is that in the time it took me to get about 1/4 of the way through the easy one, Rachel had finished the hard one. Oh well, she's had a bit more practice than I.

As we were getting ready to leave Mazatlan, I made my way up to deck 9 forward, just in front of the gym to watch our departure. I had been watching the activity on the dock off and on during the day, and it was interesting to watch hundreds of new cars being lined up near the dock. I assume that they had been built in a Mexican factory and were getting ready to be loaded onto ships for export. Because it was a bit windy, the captain gunned the engines so we came up to speed pretty quickly as we went through the narrow opening in the breakwater as we headed out to sea.

We had another nice dinner with the whole family and then headed out for more music. I believe that John and Kitty came with us again tonight, and we spent a little time with all our favorite music groups. At this point the nightly music was starting to all be a blur so I can't remember exactly what we did, although we absolutely enjoyed all of it. It turns out that we really enjoy the early seating for dinner so that we have lots of time in the evenings to hang out and listen to music. 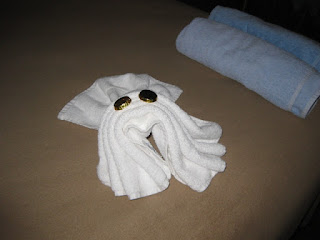 Then it was off to bed since we had an early shore excursion in Puerto Vallarta the next day. Rachel had meant to sign us up for a "canopy adventure" where you go into the jungle and slide down a few zip lines, but instead we were signed up for the "outdoor challenge" which involves speed boats, military transports, mules, zip lines, rappelling, etc. We did bid farewell to my family at dinner that night, just in case we didn't make it back. By the way, the cabin stewards often leave "towel animals" on your bed in the evening, and I can usually figure them out, but I couldn't get tonight's. An octopus? A muppet? Not sure.
Posted by Twobones at 9:05 AM