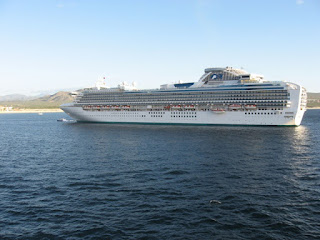 We had started to notice it the evening before, but by morning it was quite obvious that the seas had gotten rougher. Nothing bad, but the ship was gently rocking a little more than it had previously. When I tried to open our verandah door to step outside, it took a whole lot of effort because the wind was blowing pretty hard. Cabo San Lucas does not have port facilities to handle anything as large as a cruise ship, so they all dock near the breakwater and use tenders to shuttle people back and forth between the ship and the pier. The rough seas was going to make it very interested to board the tender from the ship, but we figured they know what they're doing, so it would be fine. 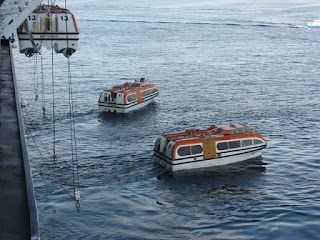 Rachel was up early again and went up to the gym while I had a shower and then watched them lower the tenders into the water. My parents had called our room wondering if we wanted to have breakfast with them, and of course we did. Rachel got back from the gym just in time and did an amazing quick change and we were down in the dining room in no time.

During breakfast I realized that I hadn't brought my contact lenses on the ship, so I wasn't going to be able to see much on our snorkel today, plus, we were concerned that the "tall ship" that we were going to sail on was just going to be a poor motorized imitation. So, right after breakfast we went down to the shore excursion office and managed to catch them just before they closed. We exchanged our tall sail and snorkel tickets for America's Cup Challenge tickets.

The same company that runs the Outdoor Adventure in Puerto Vallarta also has some tours in Cabo, and this was one of them. They have purchased 4 obsolete America's Cup racing boats and run tours where you get to crew during a race between 2 of the boats. The world of racing sailboats changes quickly, so in this case, obsolete meant that they were built in 2002 - not exactly ancient! Pleased that we had been able to get on the tour, we went back to our cabin to relax for a while (we didn't need to be off the ship until about 12:45).

We had a light early lunch on the Lido, and noticed that the ship was slowly rotating. We wondered if maybe they were doing a barbecue roll to even out the heating from the sun, but later found out that they were repositioning the ship with respect to the swells so that boarding the tenders would be easier. After lunch we headed down to get on the tender. Earlier in the day, you needed to take a number to get on a tender, but by now most of the passengers who wanted to get off had done so, and we showed up at the tender dock on deck A and had just a short wait while the next tender tied up. The seas had gotten considerably calmer since this morning, and the tender ride was not bad at all.

When we got off the tender at the pier, there was an amazingly long line for tenders to get back onto the Sapphire Princess that was also anchored in Cabo. I was hoping that we wouldn't see the same thing for our ship when the time came. We checked in with the tour representative and waited for the rest of the group to assemble. When everyone was there, they took us around to the other side of the marina to their version of base camp. Here we met some of the crew and divided into 2 teams - one for each boat. We were also given one last chance to use the restrooms since these boats were built for racing and didn't have any facilities on board.

We then headed back to the marina, met the rest of the crew and boarded the boats. We were on the New Zealand boat NZL 82 and would be racing against NZL 81. These boats are pretty amazing - built for speed and nothing else. They look very much like an oversized daysailer - completely open with an enclosed sail locker up front. The wheel is in the middle of the boat, and there are 4 "grinders" or cranks spaced throughout the boat. Each grinder is cranked by 2 people and can be connected alone or in concert with other grinders to any of the 5 winches on board. This allows muscle power to be directed where it's needed at any given time. One can choose to be as active or passive as you want on the tour, and I chose to be one of the 8 grinders. We first connected all 4 grinders together and the 8 of us raised the mainsail. It's got a big sail area and it was really tough to crank it all the way up. After that, the 2 front grinders were connected together to trim the jib, and the 2 rear grinders were connected together to trim the main.

Our crew then explained how the race worked: there was a start area marked by a buoy and a boat. One person did a countdown over the radio, and both boats started a 7 minute timer. With 5 minutes to go, the boats were allowed into the start area to jockey for the best start position. They could cross the actual start line as soon as the timer reached zero. The starting boat then moved upwind to a top mark and both boats sailed toward it and went around. They then sailed back down to the start line, around either the buoy or the boat (back at the starting position) and did one more lap. The first boat to cross the start/finish line on the second lap wins. We were ahead most of the time, but our skipper blew the turn around the top mark and the other boat ended up winning. Oh well, it was great fun. After the race, we sailed leisurely back to the marina as the crew passed out Pacifico beer (meh). On the way in, it was quite obvious that the crew of 5 could handle the boat just fine without us, but it was definitely fun having a job to do during the race.

Back at the marina, we skipped the gift shop and photo buying and went right back to the Oosterdam. Fortunately there was no line to board our tender even though we were within 45 minutes of the last tender back. It was a fun time, but probably our least favorite of the 3 shore excursions. We later saw the tall ship that we would have been on, and as we feared, it didn't actually have any sails up and just motored around. We had chosen wisely. 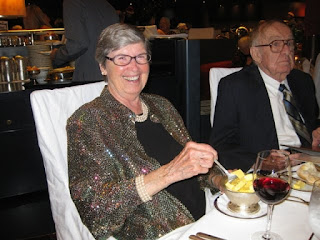 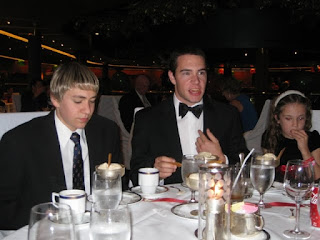 Dinner was formal again, and Tim and I wore our Christmas ties. Josh was still going for the James Bond look, so he wore his black bow tie. After dinner the chefs marched around the dining room with giant Bouche De Noel (Yule Logs) on their shoulders. I had a piece, and while it was OK, it wasn't my favorite dessert.

After dinner we posed Rachel and Sami for the pictures - they were both dressed in red and black, but opposite top and bottom. 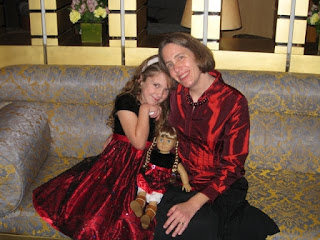 Very cute. Rachel and I then headed to the piano bar were we joined in the Christmas sing-along. It was great fun, but I was dismayed that Rachel knew the words to more of the songs than I did. We headed over to the Queen's Lounge and enjoyed Jan and the Halcats until 10:30. At 11:00, we went to the Vista Lounge to see the crew choirs perform Christmas songs. The officers and staff (including Captain van der Loo) formed an "international choir" and sang a couple of songs. Then the Indonesian choir came out and performed some traditional Christmas songs, and finally the Filipino choir sang a pointedly evangelical carol. Finally, they all came out with candles and sang Silent Night while moving down the aisles. That did it - it finally felt like Christmas. It was beautiful.

With a warm feeling inside, we made our way back to our cabin. At 12:03, the Men In Black (Josh and Tim) knocked on our door and mentioned that technically, it *was* Christmas. They had been out snacking and wanted to see if any presents were to be had. None were, and we sent them back to their cabin and went to sleep.
Posted by Twobones at 9:30 AM